Witnesses say a traffic light obscured by snow was a factor in a three-vehicle accident involving a fully-loaded school bus in south Windsor on Thursday morning. 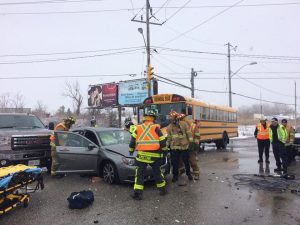 Witnesses say a traffic light obscured by snow was a factor in a three-vehicle accident involving a fully-loaded school bus in South Windsor on Thursday morning.

“I went up to (the school bus driver) and said ‘What the hell happened?” said Ron Godin, the driver of a pickup truck that was involved in the collision.

“She said, ‘I didn’t see the red light because there was snow on the light.’ That’s what she told me.”

The crash happened shortly before 10:30 a.m. at the intersection of Provincial and Sixth Concession Road, including the school bus, a grey Chrysler 200, and Godin’s GMC Sierra.

Godin said his truck was behind the Chrysler sedan in the northbound lane of Sixth Concession Road.

Godin said the bus smashed into the sedan’s driver side, hitting with such force that it pushed the car’s rear passenger side into Godin’s Sierra.

Godin said his truck took minor damage, but the sedan was “totalled.”

Godin got out to check on the female driver of the Chrysler — the car’s lone occupant. The efforts of firefighters were needed to remove the woman from the vehicle. Godin said she was conscious and talking.

Godin also checked on the packed school bus and spoke to its female driver. “I looked, and the red light was covered with snow. You couldn’t see the red light … But she should have stopped or slowed down,” Godin said.

The school bus was full of Grade 3 students from Queen Victoria Public School.

According to the public school board, two children and one staff member required “direct medical attention for unspecified injuries.”

The bus contained 32 students and five staff members in all. They were on a field trip — headed to a

event at the Ciociaro Club.

The event is meant to promote literacy and allows students to meet with authors. 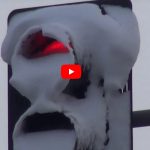 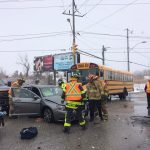 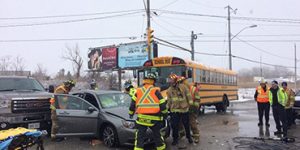