CHICAGO — Last April, the driver of a pickup truck approaching an intersection in the far western suburb of Oswego went past a red light obscured by snow and struck a 34-year-old woman turning left in her car.

The woman died and four other people were injured in the accident, which was among the first to raise concerns here and around the Midwest about a relatively new driving hazard related to inclement weather: traffic signals, like those in Oswego, that use light-emitting diodes, known as LEDs.

The new lighting is part of a fast-growing trend in environmentalism. LED bulbs use less energy, last longer and are more visible than their predecessors. They are also known to require less maintenance. But they do not emit nearly as much heat as conventional bulbs, allowing snow and ice to accumulate more easily in certain conditions.

As winter storms roared through the country’s midsection and pummeled the East Coast, officials said they were on the alert for LEDs.

In Illinois, Iowa, Minnesota, Wisconsin and other states, special efforts are being made to ensure that the signals do not pose an undue threat to drivers.

“Do I think the accident would have happened if the light was not covered in snow?” said Detective Rob Sherwood of the Oswego Police Department, referring to the accident in April. “I’d be willing to bet that it would not have happened if the driver that went through the light had an unobstructed view of the signal. It was the first indication in this community that the LED lights were not melting the snow.”

In the last seven years, Wisconsin has converted more than 90 percent of the lighting under state control to LED bulbs. 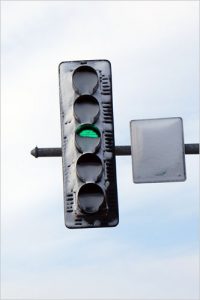 “We certainly do see crashes and accidents attributed to the fact that people can’t see the heads,” said Joanna Bush, a traffic signal systems engineer for the Wisconsin Department of Transportation, referring to traffic signals’ colored lenses. “Due to the volume of snow we’ve been getting — good, wet heavy snow — it packs in.”

Transportation officials have been dispatching workers with brooms to clear the lenses, Ms. Bush said. They are also experimenting with a solution that is less labor-intensive and more permanent, outfitting some of the lenses with sloping snow shields to make it harder for snow to stick.

In bad conditions, officials said, only one side of a two-sided traffic signal might become obscured — making traffic heading in one direction most vulnerable, depending on which way wind-driven snow blows.

“We’re reactive,” said Dale Tech, the city engineer in Rapid City, S.D. “If the snow is just right and the snow sticks to the light, we have to go out manually and remove the ice.”

Mr. Tech said LED signals had resulted in the consumption of about 30 percent less energy for Rapid City in the two years they have been in use. The snow-packing problem is a nuisance, he said, but has been minimal because it requires a combination of wind and wet snow that does not occur very often.

In Minnesota, an official said there had been snow-packing problems even with conventional bulbs.

“Drivers should take a common-sense approach,” said Maj. Al Smith, a special operations officer with the Minnesota State Police. “If you can’t see the light, just take it as a safety precaution to slow down and be prepared to stop for crossing traffic.”

For most states, the benefits of LEDs are greater than the downside, officials said. LEDs contain no toxic elements and can last so long — for years — that disposal is not much of an issue.

Their tendency to collect snow “isn’t enough to convince us to move over from LEDs,” said Ms. Bush, the Wisconsin official. “When you look at all the things we deal with during a snow event — stop signs and other signs get covered — that hasn’t stopped us from using them.” 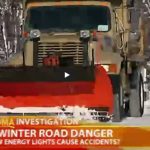 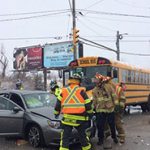 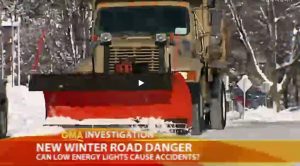 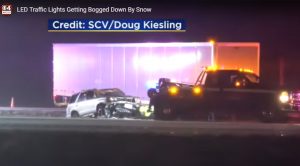 LED Traffic Lights Getting Bogged Down By Snow 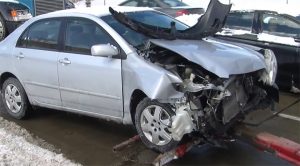